“Say it laut! Blackness and Feminism in German Rap”

Women are few and far between in the rap world, but SXTN has a legacy of rappers to build their careers on. Many rappers before them have openly discussed the intersectionality of race and gender in their music. In particular, rapper Lady Bitch Ray attacks misogyny in her videos and academic work. I argue that the legacy of rebellion playfulness in Lady Bitch Ray’s music continues through the rappers of SXTN. Juju and Nura, the MCs of SXTN, began their careers in 2015. They have had many hits including “Hass Frau,” which is a quote taken directly from white German feminist Alice Schwarzer. For the BGHRA conference, I plan to focus on their 2016 hit song “Ich bin Schwarz.” Thinking through this song as a feminist project and a Black-pride anthem, I use May Ayim’s poetry and Carrie Smith and Maria Stehle’s awkward theory to analyze the playful performativity in the video. The playfulness in the music video “Ich bin Schwarz” enables a rich discussion of the complexity of race and gender that initially seems brash and superficial. In a digital medium, SXTN rejoices in Blackness while also considering anti-Blackness as a global phenomenon. 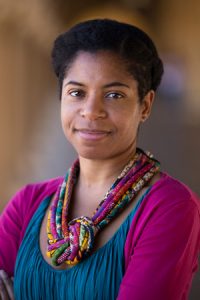 Jamele Watkins is a Post-doctoral Fellow in German Studies at Stanford University and an incoming Assistant Professor at the University of Minnesota, Twin Cities. She engages in intersections of race and gender in Germany in the 20th and 21st Century. Her current book project, Roses for Angela, examines East German transnational solidarity with Angela Davis. She received her Ph.D. from the University of Massachusetts Amherst where she wrote her dissertation, “The Drama of Race.” The dissertation examined the ways in which Black Germans make their experiences visible on stage. Her recent articles tackle Black hair, communist faith, and violence.