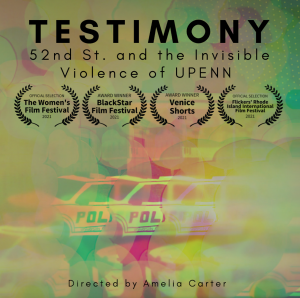 Short film screening and discussion with Amelia Carter, director of:

Testimony: 52nd St. and the Invisible Violence of UPenn

Amelia Carter is a Black lesbian cultural activist and community organizer from Philadelphia with a background in filmmaking and mosaic art. Her work focuses on economic equity, human rights, racial justice as well as gender and sexual liberation. In addition to developing a career in Global Education at the University of Pennsylvania’s South Asia Center for six years, Amelia Carter is the founder of Penn Community for Justice (PCJ) and Philly Human Rights Appeal.

In 2020, Amelia Carter created the film, “Testimony: 52nd St. and the Invisible Violence of UPenn.” The short stop motion animation film is based on her personal experience with police violence on May 31, 2020, when the Philadelphia Police Department attacked residents in the predominantly Black neighborhood of Cobbs Creek for several hours. Five private police forces, including campus police from the University of Pennsylvania (Penn), assisted in the militarized assault. As a resident of Cobbs Creek and an employee at Penn, her film locates the university’s participation in the attack as part of a long history of institutional control over the neighborhood via university-driven gentrification (UDG).